Discover with Finest Holidays Africa and book a 5-star Safari Lodge. Zimbabwe offers all of the drama and beauty associated with the continent. The country’s undiscovered wildernesses are filled with breath-taking views and once-in-a-lifetime experiences, including close encounters with the Safari Big Five. You can expect a warm welcome in luxurious and sensitively developed, sustainable lodges as you take in sights like the Victoria Falls, the Zambezi River, Malilangwe Lake and Great Zimbabwe, one of Africa’s most important historic cities.

Though Zimbabwe is landlocked, water has shaped the country’s landscapes. In the south, the Limpopo zigzags through plains and forests, forming borders with South Africa and Botswana. The waters of the great Zambezi River help divide the country from Zambia, plummeting over the cliffs of the Victoria Falls (Mosi-ao-Tunya or ‘the smoke that thunders’) – one of the natural wonders of the world – on their way to Lake Kariba. That is the world’s largest man-made lake, an important ecosystem that in Lake Kariba and Matusadona National Park is one of the country’s best wildlife parks.

To the west, the Hwange National Park is the largest park in the country, most famous for its elephant herds, and also Cecil the Lion, whose trophy killing caused such outrage in 2015. On the Limpopo border with South Africa, Gonarezhou National Park in the south-east is named for its abundant elephants, and forms part of the gigantic Transfrontier Park that includes South Africa’s Kruger Park. Matobo National Park is a contrasting landscape, with granite kopjes jutting out against the horizon, and black  eagles swirling around the mountains. Matobo was once a hunting ground for 19th-century monarch, King Mzilikazi, and Zimbabwe’s human history has helped shape a rich traditional culture that is well worth exploring.

Most famously, Great Zimbabwe, in the south east, is one of the biggest medieval monuments in Africa, its dramatic, crumbling walls dating back as far as the 11th century. The city was built by the Shona people – members of the Bantu group – and their traditional culture is one of many that still thrives in Zimbabwe. Natural refuges like Malilangwe Wildlife Reserve have been designed not just to provide superlative lodge accommodation, such as our luxury Pamushana Lodge, but also to world-leading standards in ecological sustainability and cultural sensitivity.

Malilangwe, whose ancient baobab trees shade several hundred animal and bird species – including the Big Five – and also 2,000-year-old rock art sites, and living museums of the Shangaan community, a Zulu people. Zimbabwe is changing fast. A new international airport at Victoria Falls is opening up more international travel in the north-eastern national parks, while the south of the country is served via Tambo airport in Johannesburg. Zimbabwe is a treasure, discover it now and enjoy a priceless experience in this most exciting and unspoiled of safari locations. 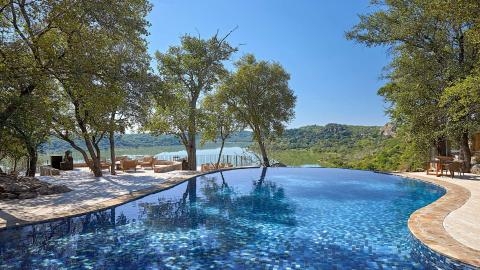 One of Africa’s best-kept secrets, Singita Pamushana Lodge is found within the Malilangwe Wildlife Reserve in south-eastern Zimbabwe. Nestling beneath the trees, the lodge incorporates the natural environment and the forest-like architecture enhances views of the pool. More Details