Kenya is the world’s most famous safari, wildlife and wilderness travel destination. More than 50 natural parks are teeming with some of the most impressive wildlife in the world. There are many diverse habitats across a country that is a continental boundary: to the south, the lush greens of Tanzania; to the north, the more arid lands of Somalia and Ethiopia; to the west Uganda’s mountains, gorillas, and Lake Victoria; and to the east, the vast Indian Ocean, to which Kenya has long opened up East Africa. Kenya is the historic home of the safari holiday, and so can boast lodges and nature reserves with real heritage and the timeless virtues of style, service and setting. A destination like Masai Mara is a household name in its own right; home of the world’s most famous animal migration, and the Masai people. Elsewhere, Mount Kilimanjaro in the distance – and over the border in Tanzania - and Mount Kenya tower over contrasting wildernesses.  The Great Rift Valley – a very physical boundary - is a land of lakes, plains, forests, and highlands, and undoubtedly close to the top of any travel bucket list. Kenya has much more diversity than most safari destinations. On the coast, Mombasa, not only opens up some of the world’s greatest beaches and paradise islands, but is a wonderful city to visit, a genuine crossroads between Africa and the east Mombasa is the introduction to Kenya for many visitors. Some of the best beaches in the world are the most obvious attraction, and a well-developed holiday sector includes world-class luxury villas, hotels, golf courses, cruises, and exceptional nightlife that make the city an African Ibiza. Coral reefs off Diani Beach make it a water sports, wildlife and social destination. You needn’t confine your nature spotting trips to the seas in Mombasa, which is a great place from which to head inland to the likes of Tsavo East National Park, one of the world’s largest wildlife parks, home to big cats, elephants and more.   Mombasa itself is a unique melting-pot city where Arab, African and Asian influences make for an intoxicating mix of cuisine, architecture and UNESCO World Heritage-worthy historic sites. Nairobi has its attractions too, visit the national museum that is a good introduction to the country’s myriad cultures. The home of Karen Blixen is nearby and can be visited as an appetiser to heading out into the country’s safari parks. Masai Mara is the most famous, its enormous savannah plains and huge herds of wildebeest, gazelles and zebra among the most iconic sights of Africa. In the Great Rift Valley ancient seismic turbulence has left enormous lakes - Lake Naivasha, Lake Nakuru, Lake Mgadi and the enormous Lake Victoria - that attract huge bird populations and support hippos, crocodiles, and other water giants. Unmistakably, Amboseli National Park, has one iconic view, south to the snows of Mount Kilimanjaro. For lucky travellers, the foreground of that view will include a herd of elephants, in one of the strongholds of the world’s largest land mammal. The Central Highlands offer the chance to ascend Mount Kenya and encounter some of the world’s last rhino in its hillsides, mountains, and jungles, part of the contrasting Great Rift Valley. To the north lie the river gorges and forests of the Laikipia. 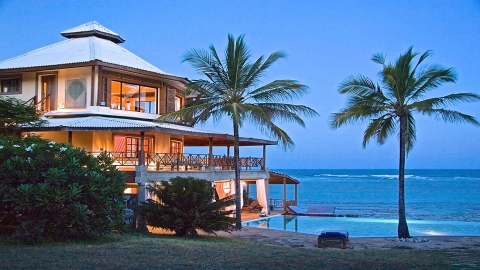 Considered by many as the finest Villa on the East Africa coast, the Cliff Villa overlooks the Indian Ocean and it ensures stunning views on Diani Beach, a stretch swimming pool sits on the edge of a small cliff merging into the sea and the horizon. Read more
Bedrooms: 4    Sleeps: 8    Pool
Price upon request 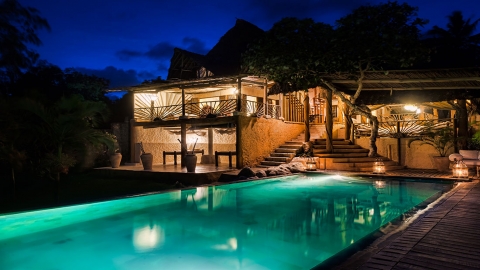 Alfajiri Beach Villa overlooks the Indian Ocean and the stunning location ensures privacy and breathtaking view on Diani Beach, considered one of the best in Kenya, where it is possible to walk for 5 miles to the north and 5 miles to the south. Read more
Bedrooms: 4    Sleeps: 8    Pool
Price upon request 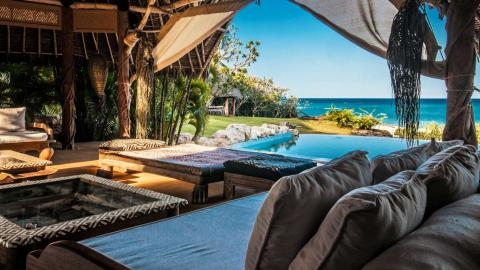 Alfajiri Garden Villa overlooks the Indian Ocean and the elevated position ensures privacy and stunning view on Diani Beach, considered one of the best in Kenya. All rooms have different interior decoration; the furniture and artefacts have been collected in different countries around the world. Read more
Bedrooms: 4    Sleeps: 10    Pool
Price upon request