In Tanzania, more land is devoted by law to preserve the unique eco-system than within any other wildlife observation destination on the globe. Remote reserves, untouched coral reefs, crater highlands and world-famous national parks are to be sheltered for future generations. One travels the East African country with astonishment and reverence for this magnificent natural scenery.

Tanzania can be translated - snow-covered peaks in the Kilimanjaro massif with Africa's highest mountain, the Kibo (5895 meters), "endless plain", the Serengeti, which extends into the south of Kenya, huge craters as Ngorongoro, vulcanos, three of the largest lakes - Lake Victoria, Lake Tanganyika, Lake Malawi - on the Dark Continent and of course 16 national parks.

Acacia umbrellas and baobab trees, the beguiling scent of vanilla, nutmeg, cinnamon, cloves and turmeric on the Arab-influenced island of Zanzibar, tropical rainforests, endless savannahs and bush land, anchored dhows on the coasts and snow-white powder sand beaches on Pemba - this too means Tanzania.

Are you looking for the best dive sites on the Swahili coast? Would you like to learn more about trekking tours through the Ngorongoro Highlands? Or are you looking for your very own individual safari adventure? Then Tanzania is the place to be - the colours and sounds of Africa come alive in Tanzania.

Lose your heart in the boundless plains of the country's oldest national park, the Serengeti, one of Africa's most beloved safari destinations, where horizons know no ends are and discover the spectacular landscape and breathtaking wildlife on an exclusive safari designed to your personal perceptions, perfect for observing the annually recurring natural spectacle, animal migration.

Witness the legendary herds of elephants, tree-climbing lions, the lush birdlife, wander through the smaller reserves on a trek or a day trip - accompanied by experienced trackers - and immerse yourself in the year-round wildlife paradise.
(Photo © Pixabay) 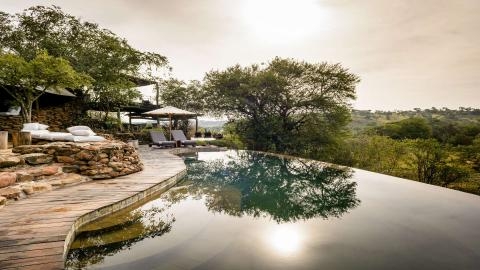 Sabora Tented Camp represents a return to an enchanted time. For those who had the adventurous spirit and the means to go on safari in their grandest manner, the 1920s and 30s were a golden age. Now at Sabora, that bygone... More Details
Bedrooms: 19    Sleeps: 40

Sasakwa Lodge rambles along a rocky promontory perched above the rolling plains, it is among the most deluxe accommodations ever built in East Africa. Singita Grumeti, Serengeti National Park. For 34 guests. More Details
Bedrooms: 19    Sleeps: 42