Sainte-Foy-Tarentaise is a village in the Tarentaise Valley in Savoie, France. The old village lies on the main road between Bourg-Saint-Maurice and Val-d'Isère. About 4 km above the village is the ski resort of Sainte Foy (referred as Sainte Foy Station). It is a small resort with four chairlifts, 15 slopes and some lovely luxury ski chalets. Sainte Foy has groomed pistes which are often very quiet, but it is more famous for the off-piste skiing and snowboarding.

Sainte-Foy village is a Savoie style village, built from stone and wood. It has remained unspoiled compared to many mountain villages and ski areas in France. The village centres on a cluster of bars and restaurants. There is accommodation in the main village including luxury hotels and chalets. There are chalets offering accommodation in the satellite villages of La Masure and Le Miroir. The ski resort sits high above the village at 1550m above sea level.

The resort was built in an old farming hamlet, some of which survives as chalet accommodation. Most of the village has been built recently, but in a sympathetic style using wood and stone. There are also luxury apartments. There are two spas in the resort, both with swimming pools, jacuzzis, and saunas, as well as massage and beauty treatments. The village has five ski shops, two bars, three restaurants and a small supermarket.

The mountain has four chairlifts and two magic carpets for beginners. There is a vertical drop of just over 1000 m from the highest point at the Col de l'Aiguille (2620 m). There are around 20 pistes, with a choice for all ability levels. A green trail snakes through the trees back down to the resort while the new Grande Soliet run down from the Marquise chairlift offers a long, wide, swooping blue-grade trail. Red runs vary from the roller-coaster of Les Creux de Formeian to tight, steep challenges. There is one groomed black run but another three marked off-piste areas, also graded black.

While the on-piste skiing is excellent for beginners and confirmed skiers, the resort is also known for the off-piste terrain. This varies from short runs between the trails to legendary descents such as the easy tour to the village of Le Monal or the fearsome north face of La Fogliettaz. 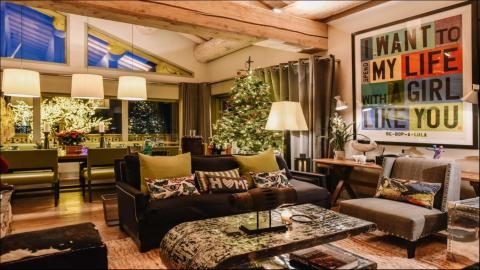 Yellowstone Ski Lodge a luxury chalet with 6 en-suite rooms, you can walk straight onto some of the world’s best ski slopes, in Sainte Foy, between Val d'Isère and Les Arcs, the jewels in the crown of the Espace Killy. Luxurious Jacuzzi/swim spa. More Details
СПАЛЬНИ: 6    МАКС. ПЕРСОН: 12 + 3