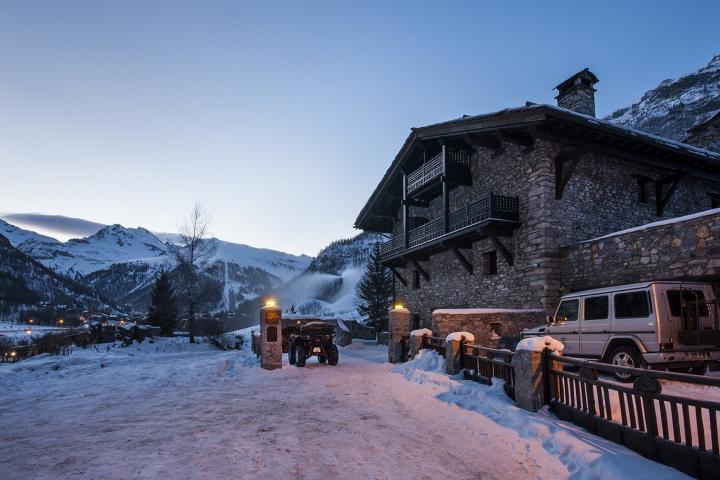 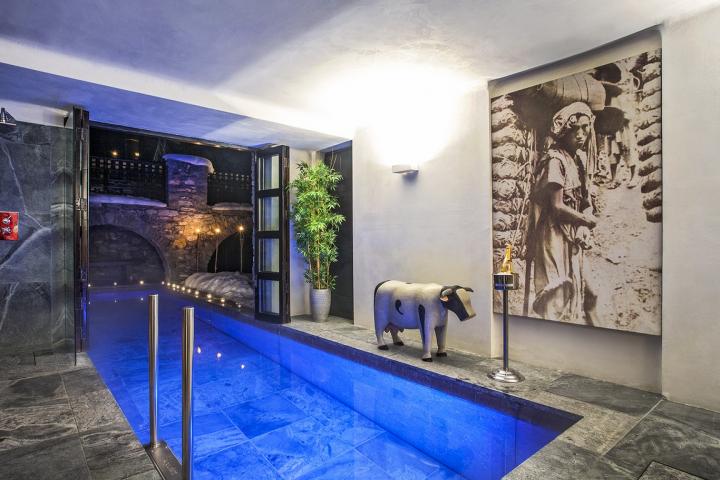 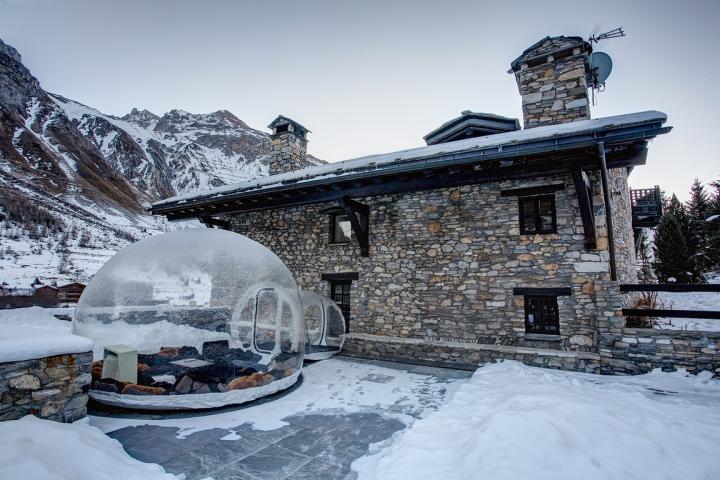 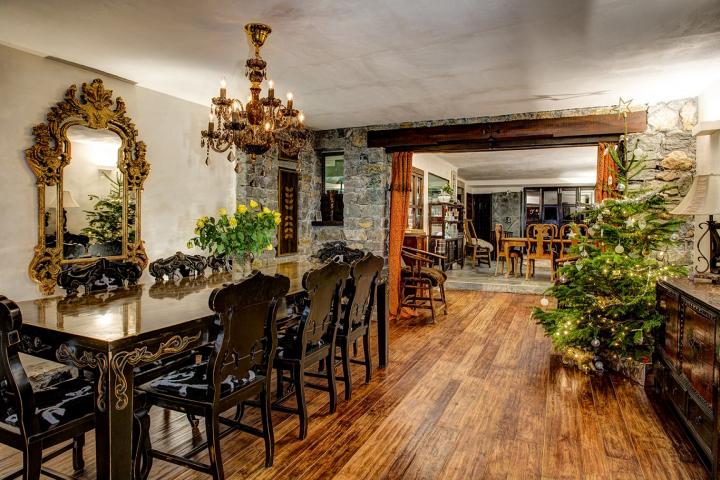 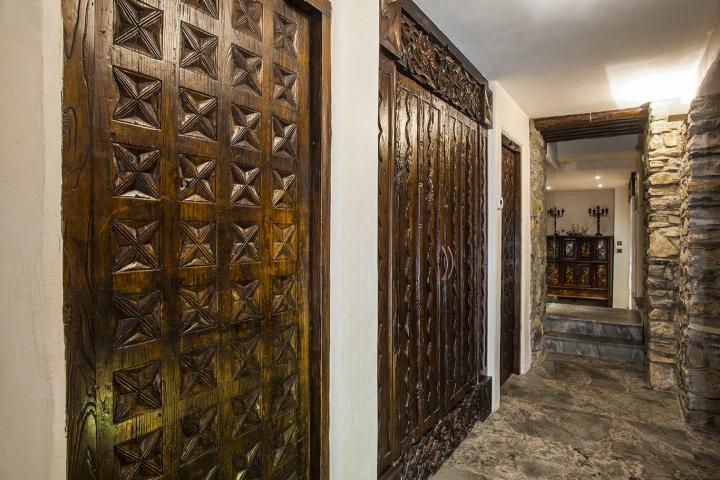 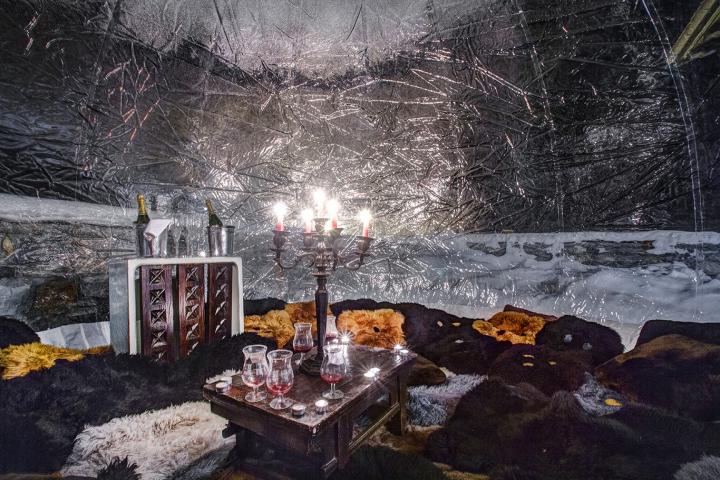 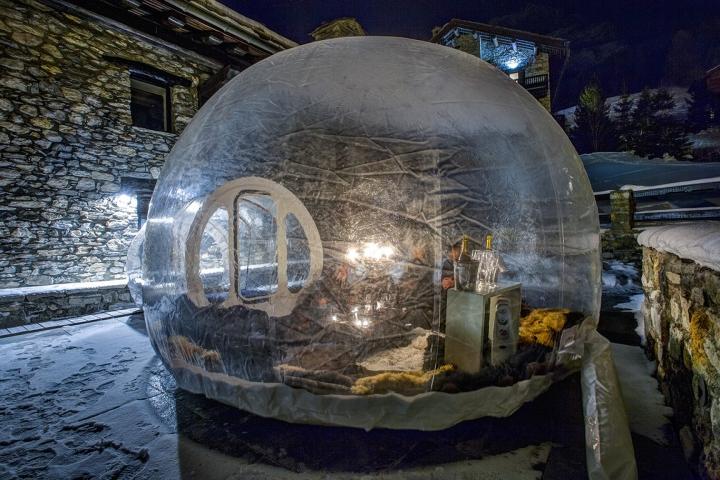 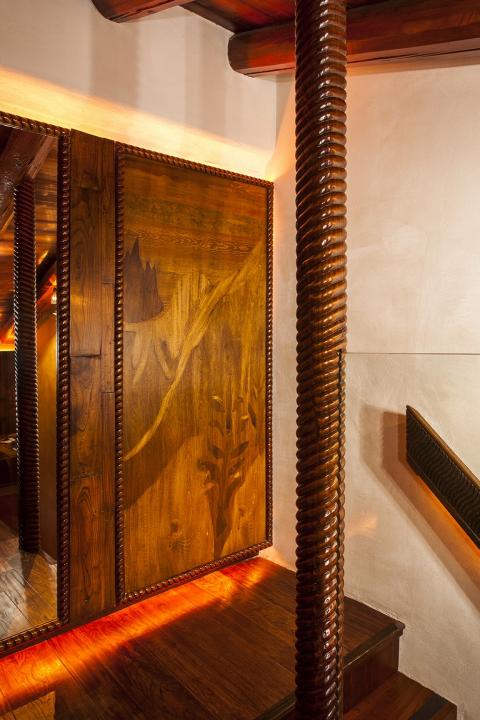 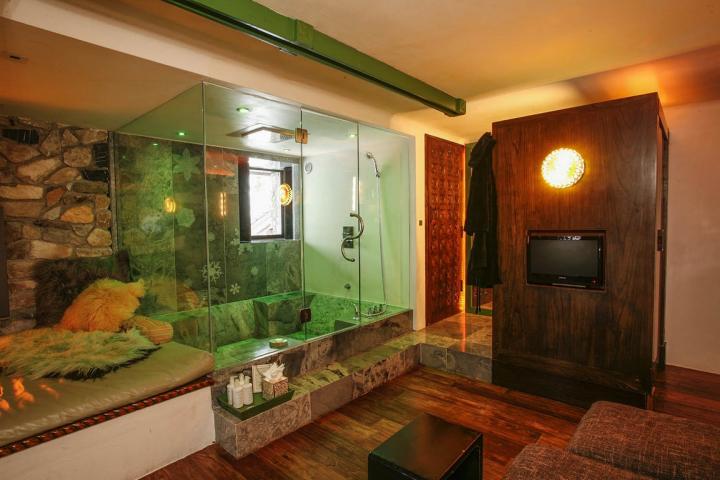 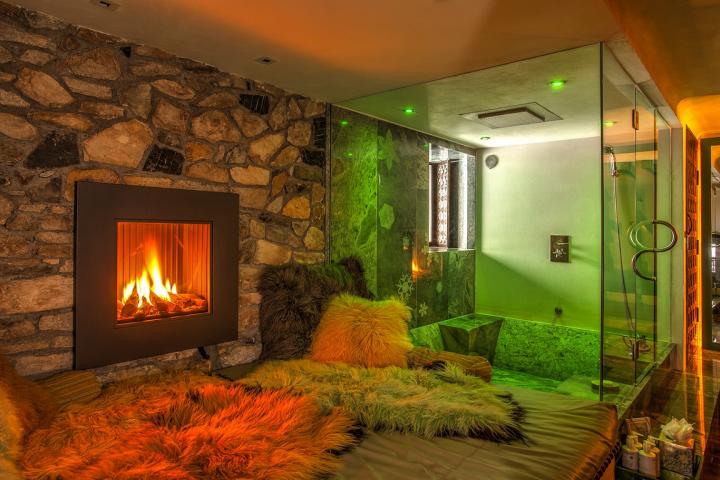 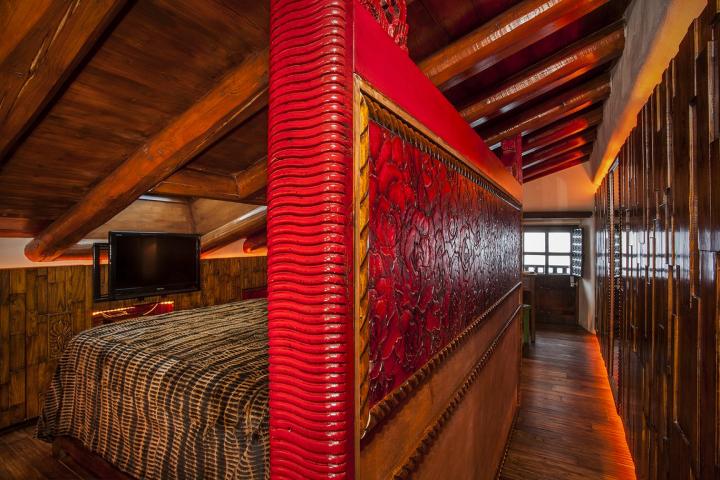 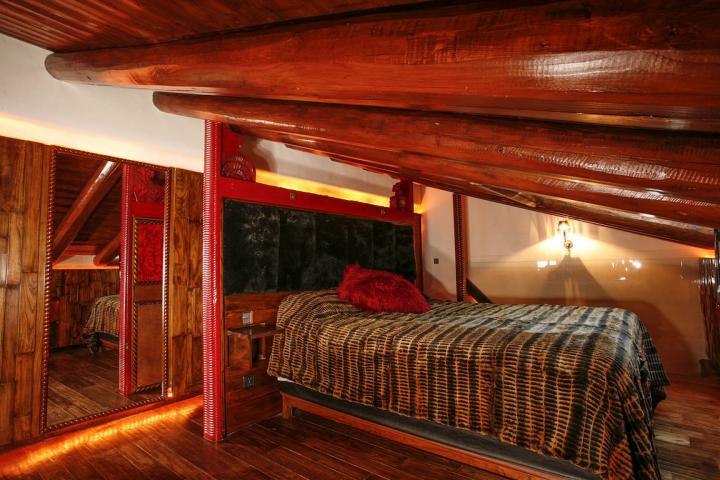 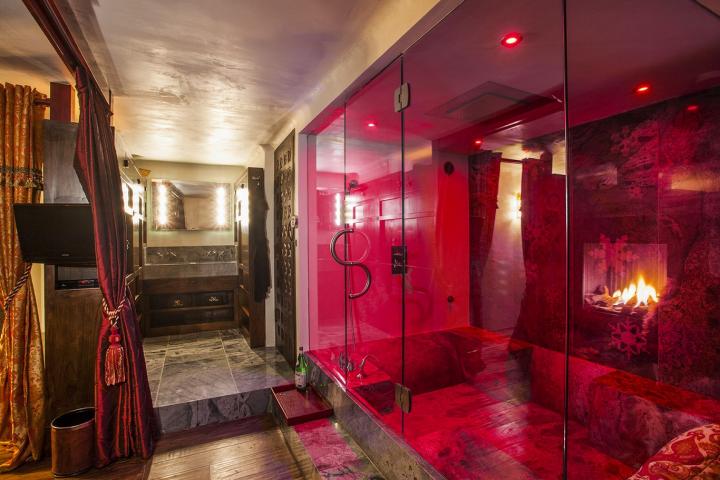 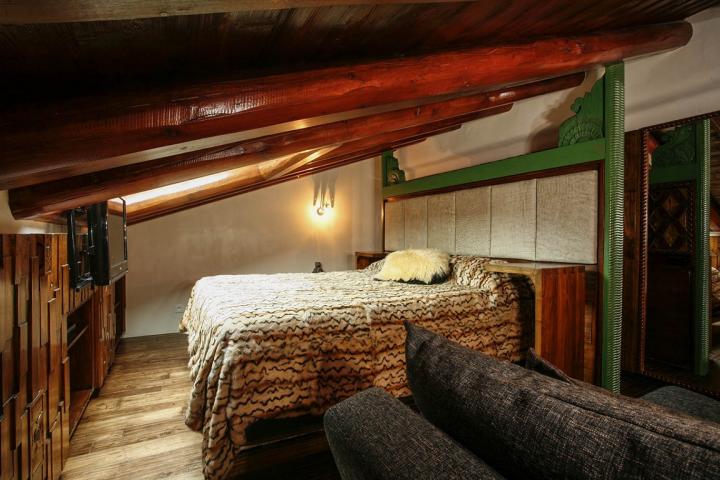 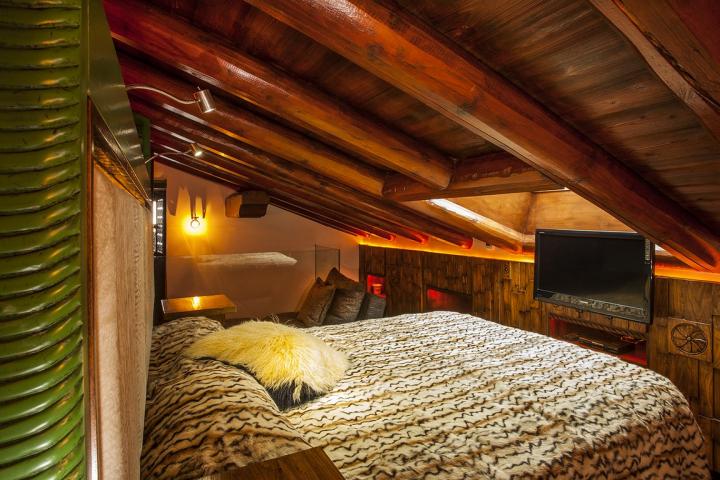 Chalet Himalaya offers the most luxurious modern comforts imaginable. Himalaya is a former monastery dating from the 17th century. Situated on the piste, it is a landmark building in the hameau of La Daille in Val d'Isère. Original features such as the massive fireplace and the stunning window stone seats (where monks would have sat and read till daylight faded) are enhanced by modern ornamental features and state of the art facilities. There is the movie screen which appears at the touch of a button. Then there is the invisible swimming pool which can pop up between the dining area and the cigar room where guests can relax after sampling the delights prepared by their chef.

All bedroom suites have separate sleeping and relaxation areas. The marble walls of the bath are adorned with delicately engraved snowflakes, while the floor of each bath is subtly heated. The bath is of impressive proportions, each commands a rain shower and converts into a steam room, easily seating up to 4 or more persons, with remote-controlled lights. On your arrival at the chalet the superb Perrier Jouët will await you, and during your stay we offer their vintage á la carte selection, including their legendary Belle Epoque. The chefs will even prepare a specially crafted menu that puts champagne at the heart of every dish; perfect for a celebration - or just a glorious indulgence.

We can arrange spellbinding experiences such as husky sledding, or an expedition to your own private igloo. Family holidays are the most precious times and we take great pleasure is making sure they are the best ever.


All prices are subject to change and will be confirmed at time of the booking.
Enquire

In the hameau of La Daille in Val d'Isère

Our luxury ski chalets in Val d'Isère are available catered and self-catered, for the best luxury ski holidays. Some are Ski-In/Ski-Out. Many have swimming pools, sauna, hammam and hot tubs. Val d'Isère is located only five kilometres from the border with Italy, on the border of the Vanoise National Park created in 1963.

The ski resort Val d'Isère, in the Savoie region of France, is a colourful wintersports haven that began as a farm community in the years BC. The town received parish rights in 1637 and the parish church, which is still a landmark in the town centre, was built in 1664.

The charming village finds its 1,800 residents outnumbered 15 to one by guests in winter. The western and central areas of Val d'Isère are most recognizable by their "chalet" architecture, while in the eastern part of the town high-rise architecture dominates the landscape.

Along with nearby purpose-built Tignes the area forms part of the Espace Killy, the self-titled "Most Beautiful Ski Area in the World". Named for Olympic hero Jean-Claude Killy, who grew up in Val d'Isère, Val is the better-known part of the skiing region and one of the best ski destinations in the French Alps.

The Val d'Isère village is long and thin at the bottom of a deep V-shaped valley. As you approach the resort you pass by Lac du Chevril, under which the old town of Tignes (sunk in 1952) is found. You then enter Val d'Isère via La Daille where the Olympic downhill run finishes. This is a very popular way for skiers to leave the mountain on Val d'Isère holidays, as it is directly below the greatest après ski party in France at Folie Douce. The ski down at closing time is riotous but only recommended for strong intermediates and above. The Pissaillas Glacier offers summer skiing, as well as the usual winter fare.

The ski slopes themselves are equipped with a high-volume gondola, able to transport standing skiers, the funicular Funival from La Daille via a tunnel to the top of Bellevarde, traditional chair lifts - some with windshields and many detachable, button/disc-pulls - and tow-ropes. There are both groomed slopes and backcountry (off-piste) skiing. The slopes' difficulty levels are particularly high. However, as in Tignes there are grand, easy  pistes as well. It is first class off piste country for powder addicts and there are many good guides available.