Rent a luxury villa on the Côte d'Azur, one of the most glamorous summer holiday destinations in Europe. It winds and turns for more than 160 kilometres and is peppered with glittering legends such as St Tropez and Cannes - and idyllic towns above the coast, including Vence and Èze.

Our luxury holiday homes and exclusive villas for rent are staffed and located in the most desirable locations on the Côte d'Azur - in St Tropez and Nice, Cap Ferrat and Cannes, Vence and Ramatuelle and other well-known holiday destinations on France's Blue Coast.

The Côte d'Azur polarises people and opinions like few other holiday destinations in France - the glamour queen of the coasts, synonymous with chic and elegance. The cities that cross it bubble over day and night: luxury shopping, culture, lavish festivities, exhibitions and events, everything is there. Authenticity and the art of living characterise this multi-faceted area.

The "anteroom to paradise" - as dubbed by the Dutch poet Cees Nooteboom - owes its name to the wealthy lawyer, writer, poet and MP Stéphen Liégeard. Spending the winter months at his estate in Cannes and enchanted by the landscape, he called it the "Côte d'Azur" in analogy to his birthplace in the "Côte d'Or".

The Côte has always been, and still is, the playground of the "rich and beautiful", of artists - architects, musicians, directors - and the art of living, of European aristocracy, jet-setters, American self-made men and women, and Hollywood's crème de la crème. Especially because of such world-famous places as Saint-Tropez, Cannes and Nice, Cap Ferrat, Cap Martin, Cap d'Antibes and Cap d'Ail. And of course the epitome of extravagance - Monte Carlo. The sound of these words alone stimulates the imagination, as they promise sophisticated life, elegant yachts, excellent restaurants. Between Menton and St Tropez, Monte-Carlo and Grasse, there are an incredible 33 Michelin-awarded master chefs, who together have 46 of the coveted stars.

Don't miss to explore the lyrical vision of the Côte d'Azur. The violet-scented streets of Grasse, the fine beaches of Menton on the border to Italy, the markets in the tranquil mountain villages of the Var, which are only a little higher up, and the cobbled streets of Fréjus and St Raphaël allow you to "walk" through history.

The modern concept of leisure travel developed on the Côte d'Azur in the early 1920s. Before, wealthy people and their sons took the "Grand Tour" to gain a cultural flair, or they visited the Swiss Alps for their health, but few thought of devoting themselves exclusively to relaxation and sunbathing.  In addition, on the French Riviera the "season" also took place in winter.

This new trend, however, was rapidly gaining momentum thanks to celebrities such as Coco Chanel, who came to the then controversial conclusion that she looked more attractive with a suntan. Around the same time, Picasso spent the summer with his family at Cap d'Antibes, a place he loved for its magical light and vibrant colours. 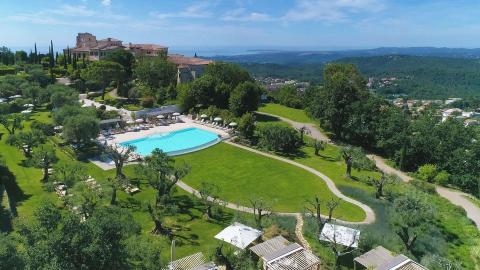 The six luxury villas at Château Saint-Martin & Spa offer stunning views over the surrounding areas, including the hotel, fields with olive trees and the everlasting magic of the Côte d’Azur. More Details